See you at the farm, Sweet Girl

The last few days have been very trying and hard, I have to admit. Yesterday we had to say goodbye to a very dear member of our family, our oldest dog Crystal. She was diagnosed with an aggressive form of cancer in her spleen and liver over a month ago and her health has declined rapidly since then. Crystal was a cornerstone in our family and we're going to have to relearn our lives without her.

This is the first dog I've ever lost. I've owned cats most of my life, but Mobee and Crystal are my first dogs.
I knew it would hurt to lose her and I've tried to prepare myself and my husband for it to the best of my ability, but damn. I had no idea. I had absolutely no idea that it would leave such a gaping hole. I can just feel it. There's an absence in my house. It's so much quieter, and every 5 minutes it pops into my head to go look for her and check to make sure she's okay...inevitably followed by that slight start of realization that she's no longer there to be found. I keep forgetting that she's gone and then having to remember again.

Because she should be here. And I miss her so much.

My only reassurance was her. It was absolutely time. She and I tried so hard to wait for her papa to be able to come home. He was sent out of town for work and could not possibly get home in time - and trust me, he tried so hard. This was his baby, his girl. Those two were inseparable.  But her little body could not wait a moment longer. She was hurting and unable to eat or really walk. She was ready. My friend, Nancy, was awesome enough to drive us and sit with me the entire time. This was the most calm I've ever seen her at a vets office. Crystal laid her head and paw in my lap, settled in, and went to sleep as I held her. I'm so unbelievably relieved that she's no longer in pain, but at the same time I felt as if someone reached inside me and yanked something out of me the moment her eyes went dark.

We are taking her to the farm on Thursday morning to bury her. It was one of her favorite places, and will be in the family for generations to come so we can visit her. She loved to swim in the pond for hours and chase tennis balls. And if the corn was high, watch out! She'll be galloping through it. Squirrels, rabbits, birds??? She's on it. She would chase her dad on the motorcycle as far as he'd let her and wade through everyone's fishing hooks. The farm is where she'll be able to stretch out in the sun and scratch her back on the grass. And if Uncle Ron happens to run over a tennis ball with the mower...well, we'll know who probably left it there.

Crystal was roughly 12 years old when she passed, and I was only lucky enough to have had her in my life for 6 of those years. She showed up on my husband's cul-de-sac about 11 years ago as a stray. She was skittish and sleeping in the bushes. They tried for days to get her to come to them, but she wouldn't. Who knows what the poor dear experienced in her life before. Then one day my husband threw a tennis ball her way. That's all it took. Evidently tennis balls were Crystal's thing. From that day on she belonged to my husband. He used to tell me stories about how he would be working in the garage at night and she would be hanging outside with him. She would disappear for a while and come back with random shoes that neighbors had left out on their porches. My husband said that he had the largest collection of mismatched shoes and slippers he'd ever seen from this dog.

When my husband and I started dating he spent a lot of time at my house. Crystal would sleep on the floor in the hall outside of his room every single night. She missed him so much and became so depressed when he wasn't home that we had to start bringing her with us. Which I did not mind at all, but Crystal did. She was not particularly fond of me at first. She really enjoyed having her dad to herself and did her best to ignore me, lol. She most certainly wasn't fond of my cats. But I eventually won her over, gained her trust, became her friend, and then her mama. And I am such a better person because of all that. She enriched our lives in every possible way, down to the corn chip smell of her paws that she stuck in our faces in the morning. Every possible way.

I know the hurt isn't over, especially because we still have to take her out to Indiana...but I feel such an astounding and profound amount of love for this little girl, and our little family...that it's doing a pretty good job of keeping the hurt at bay a bit.

Now I hope you'll bear with me here. I have quite a few photos I'd like to share with you of her.
I'm thinking things might be a bit nostalgic for a bit. 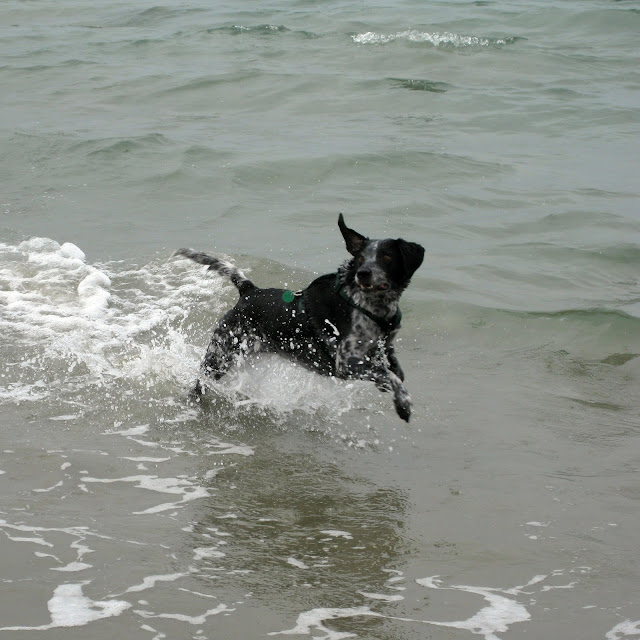 She loved the beach so much 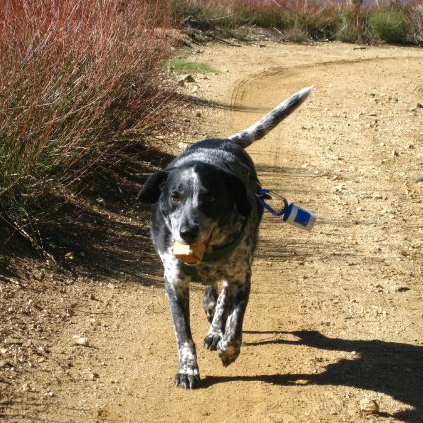 No tennis balls around? No problem. 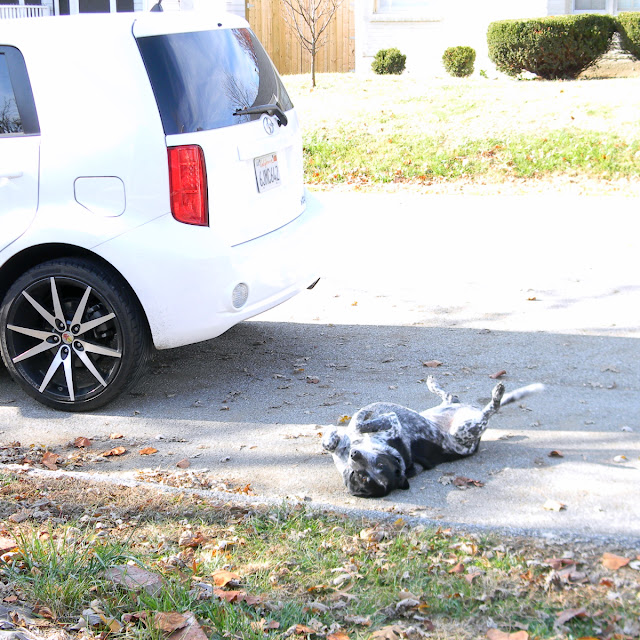 How she dealt with her dad trying to leave without her 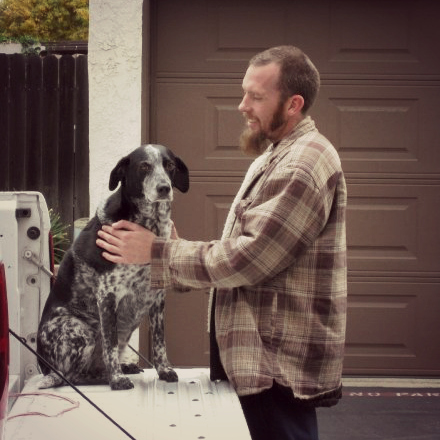 Pops and his girl 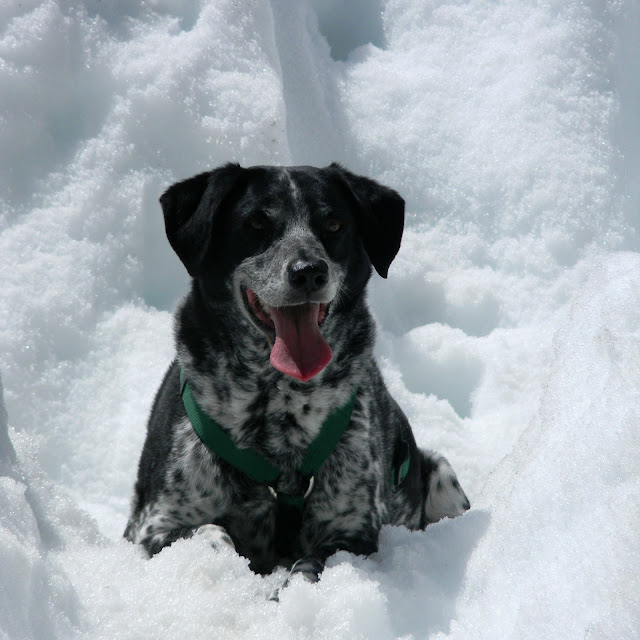 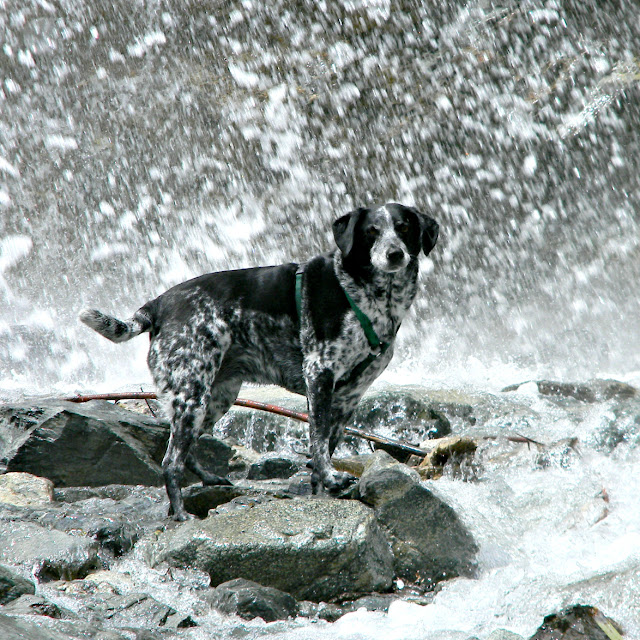 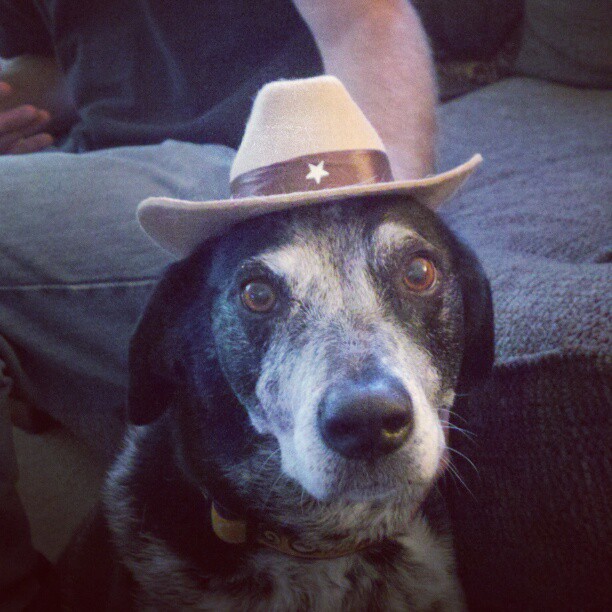 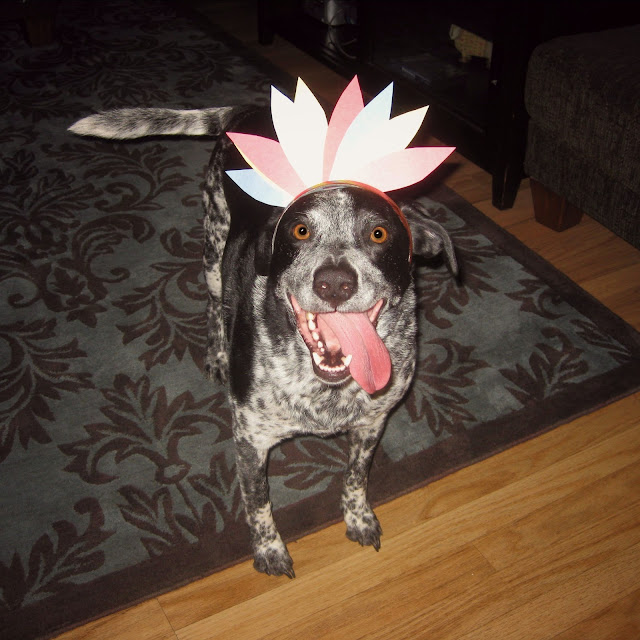 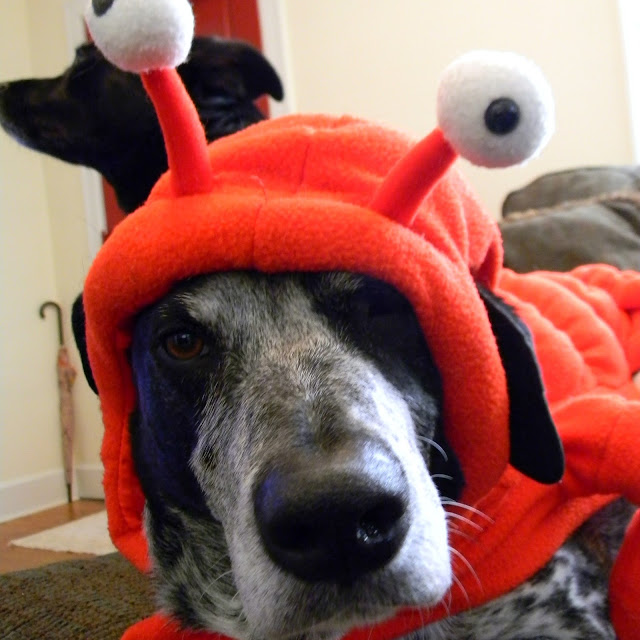 Lobster Crystal (she was so tolerant of us) 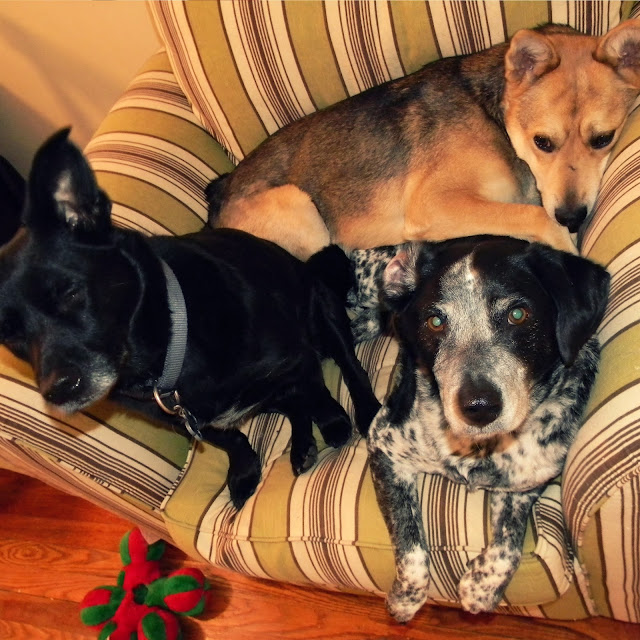 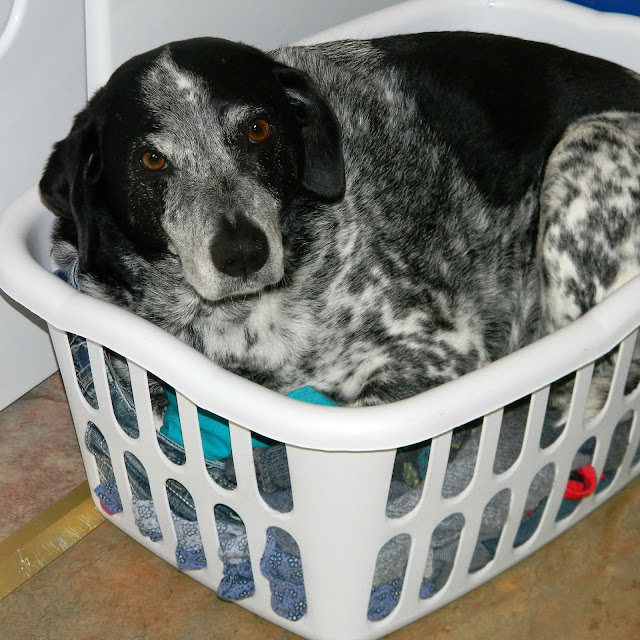 She loved sleeping in laundry baskets... 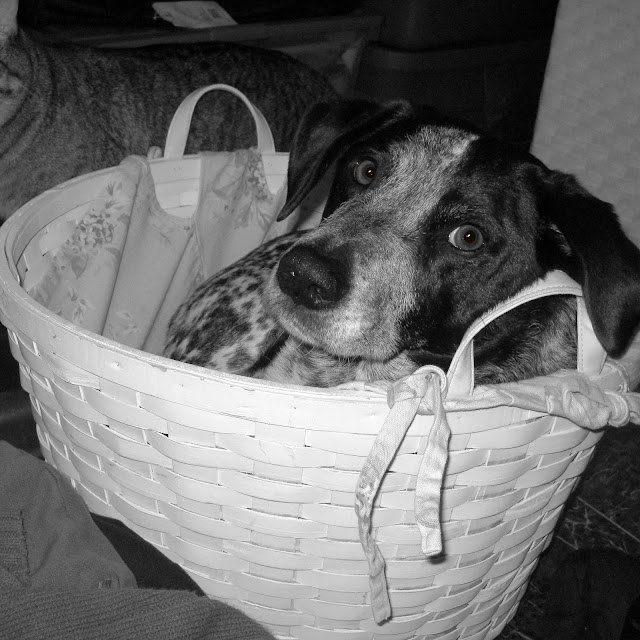 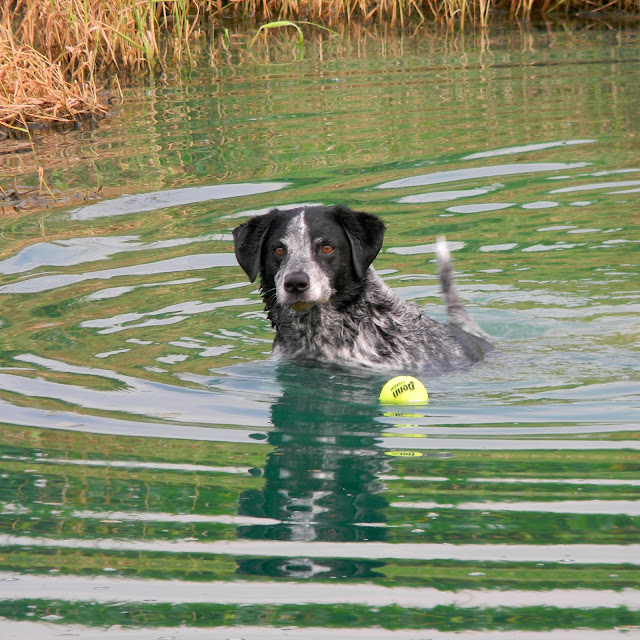 Chasing tennis balls in the pond at the farm 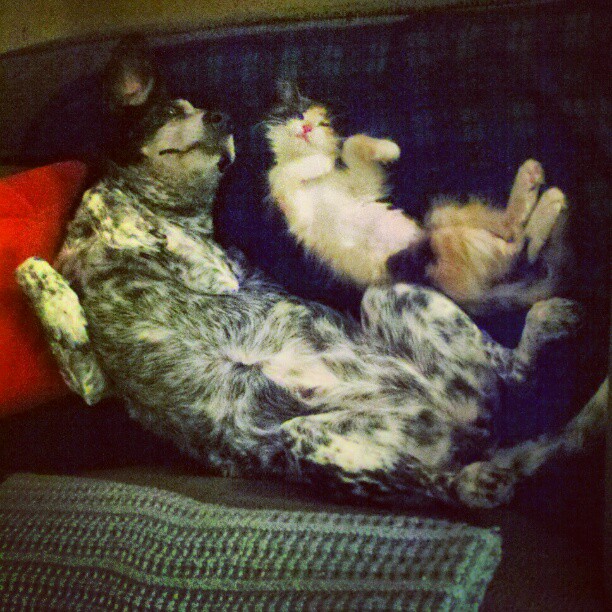 She obviously came around in the cat department 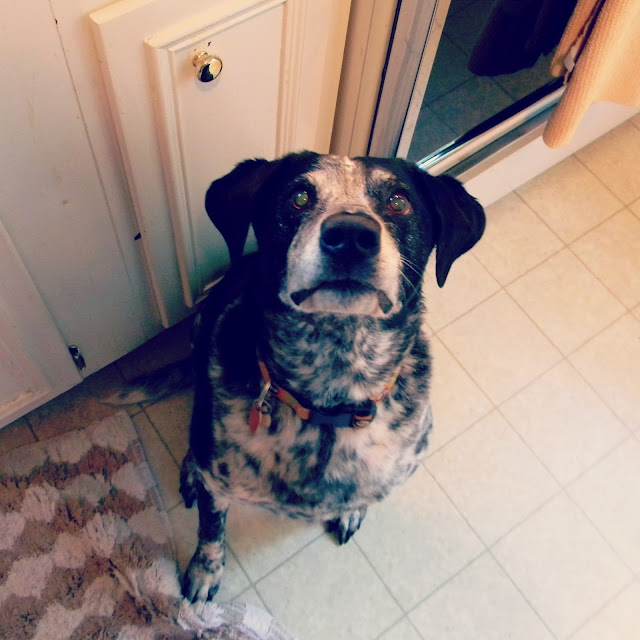 This beautiful face will stay with me for the rest of my life.
I will never, ever forget her.

RIP Crystal "The Pistol" Blain
Love ya Mamas
posted by freaked out 'n small at 4:17 PM