So that's what's up

It's been a rather weird day today...kinda matches my mood. I'm feeling fuuuuuuunky. Can't put my finger on it. Sat down and put together a Candy Corn garland for the shop - been telling myself to get one done for the past two weeks. Yeah, still dealing with that whole motivation thang. At any rate there should be some more Candy Corn available in the next couple of days. I'll post a note to let everyone know when...ya know, just in case :)

We had a pretty heavy storm that blew through this afternoon. I ran outside to drag the trash cans in before it hit and as I was traipsing through our overgrown lawn in my floppy, fuzzy pink slippers that are a full size too big, dragging the trash can along behind me - a gigantic spider crawled out of the grass and ran across the tip of my slipper - the slipper that I promptly vacated and left to the spider's devices.

Actually, I vacated the slipper, made a mental note of where the little SOB went, and then ran inside to grab my camera. You know, cause it makes so much sense that I'm scared to death of them but want to stick a camera in the face of each one I come across. I actually located it again and it turns out that it was a female spider. 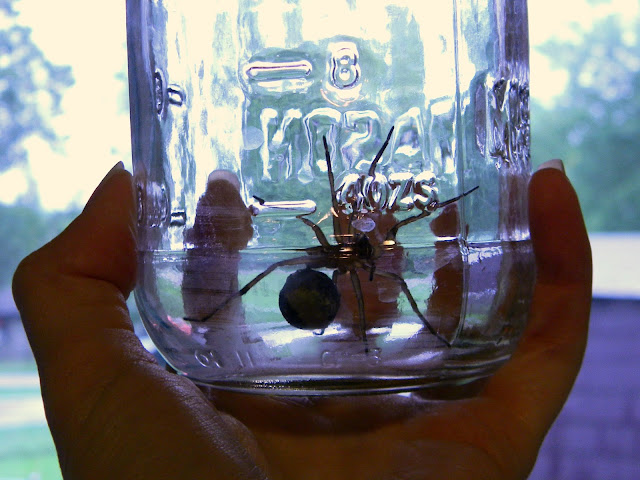 That's right. Not only did I manage to not have a heart attack, find her, and photograph her.... I managed to successfully capture her without any harm coming to her or myself....or her gigantic egg sac she is carrying. Hence the whole 'female' thing. I'm just assuming.

This is one of the two large types of spiders that occasionally find thier way into the house - we have tons outside, these are the only ones that I've seen indoors though. We get Wolf Spiders and these - which are Fishing Spiders. Would you believe me if I told you this was a small one? Body was about 3/4" long...and it had a leg span of about 2". I've had bigger in my living room. 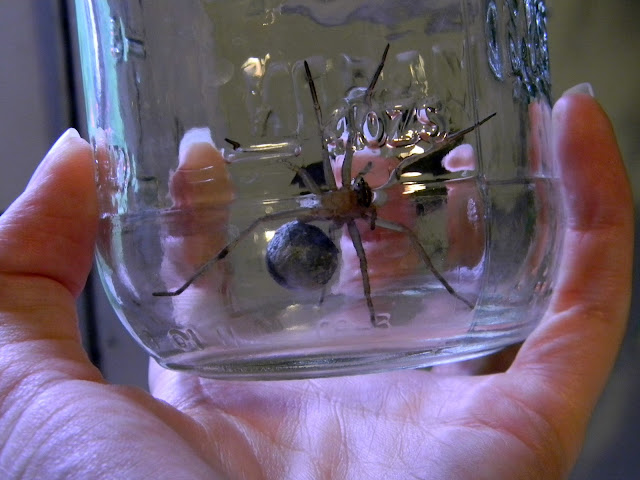 This third shot is blurry, but it's the only one I have that really shows the size of her egg sac compared to her. My camera's battery died right after this one. 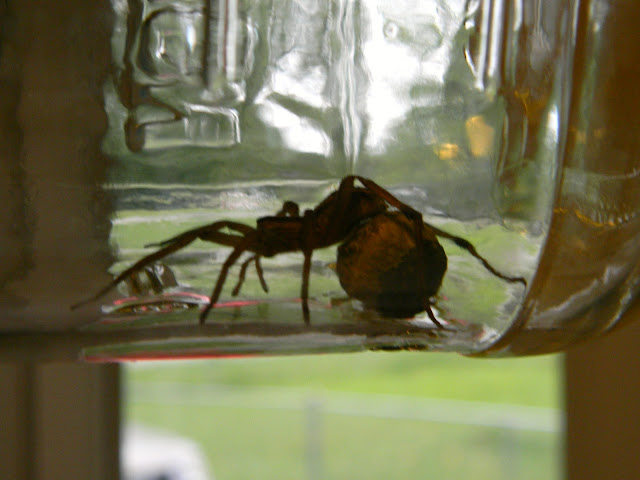 Mister Man and I took her to the creek on the other side of our neighbors house and let her go. Hopefully she won't find her way back.

I mentioned the storm earlier. It hit us hard for about an hour, but no damage. Right before the storm hit though, there was an insanely still moment, and then this strange wind that blasted all the leaves from the trees straight up into the air. I caught the tail end of it here...

Those seem to be mostly leaves from our trees. Our neighbors hate our trees - you can probably guess why. I'm not too sure what they are...we've heard Sycamore and Birch. At any rate, they drop leaves and branches (like huge honkin' branches) all the time. It's already time for us to start raking them up. Blech. I had blisters on my hands at one point last year from yard work - all because the stupid leaves. We tried just running over them with the mower, but then that just created a mulch that covered the grass and killed it off, resulting in a very muddy Winter and Spring. Muddy is no bueno with three dogs. So we've settled on raking. We figure it's a healthy way to get out and exercise. I hate exercise, and I need to start to doing more of it. Blech.

I am off to harass my husband into watching Bad Girls Club with me. Yep. I frickin love that show. Can't even find any part of my that feels guilty about it anymore.