What a rainy and sleepy weekend! Hurricane Issac paid us a brief visit. We were told to expect anywhere up to 4" of rain before the holiday was through, so we rented some movies, did our grocery shopping early Friday morning (making sure we bought some candles this time), and prepared for a cozy four day weekend at home. We didn't get anywhere close to 4" of rain. We got more like 1" over the entire weekend. Nothing to write home about. But we were still content to have a relaxing weekend at home. We baked plenty of noms, watched some funny movies and a reeeeeeaaally crappy one (Silent House), played plenty of PS3 and gave out tons of tummy scratches (I didn't even get out of my pjs all day Sunday...it was perfect).  All in all, a pretty fantastic weekend.

While we didn't get much rain, we had lots of humidity and plenty of clouds. Lots and lots of fluffy clouds. That got me thinking about them. Clouds on the brain and all... Started perusing some cloud crafts on the web and came across some really cute projects. I was in the crafting mood yesterday so I decided to start on a little something something for our bedroom...

Here's a little peek of the WIP... 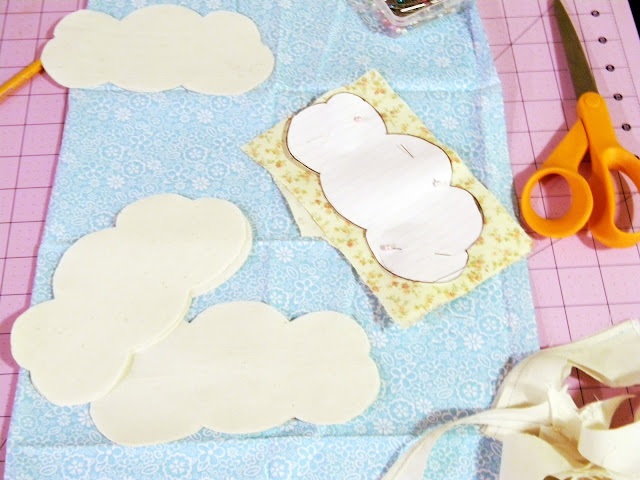 It's going to be tough to release Mister back into the work world tomorrow. I'd much rather keep him home snuggling on the couch and kicking the crap out of some poor fool online in Borderlands... At least it'll be a short week - only three days and then it's his normal three day weekend! Not too shabby, and nothing I can complain about.

Other than that, things are pretty slow around here. We've just been trying to get some things taken care of around the house. Since we've decided to sign another year lease at the place we're currently renting, we're breaking down and fixing up some of the things we'd stubbornly refused to before now. Renting blows.

On a brighter note - it's almost Fall!

Last year I tried to not bring out the holidays too early - tried not to overkill it. But this year....screw it! I can't tell you how miserable the Summers are here for me. I'm always covered in mosquito bites (which I'm rather uncomfortably allergic to) and the heat/humidity is just friggin gross. I look forward to Fall and Winter all...year...long. This is serious business and I am so happy it's just around the corner! Hot cider, pumpkins, scarves and fireplaces... Bring 'em on!

Hope you all had a great holiday weekend!