It's been a pretty eventful Summer this year so far! Storms up the wazoo, lots of activities and excitement, and the critters....oh, the critters. They have been rearing their heads again, only this year because we're further out in the country we're seeing much, much, muchmuchmuch more of them. Are you prepared? Because there really have been quite a few of them - and you know me and my pictures...  :D

We had a lot of branches piled on top of our fire pit from the storms, when we moved some of the branches to light it up we found two snakes curled up together. They were your basic Eastern Garter Snakes, harmless, and I really have no clue what they were doing. Mating? Planning to take over the world? Who knows. One was much smaller (only about a foot) and more brightly colored than the other... 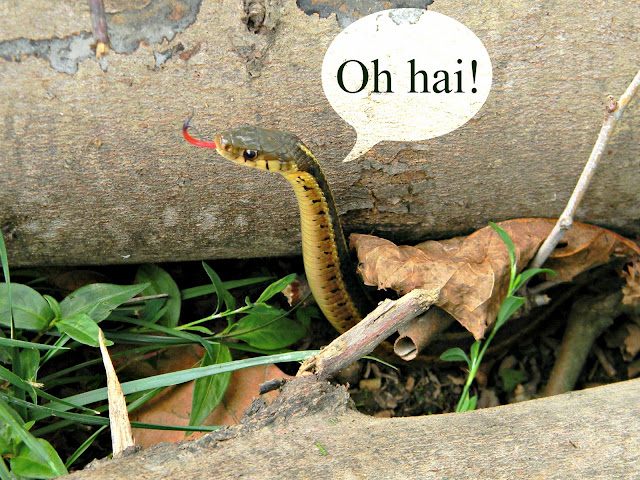 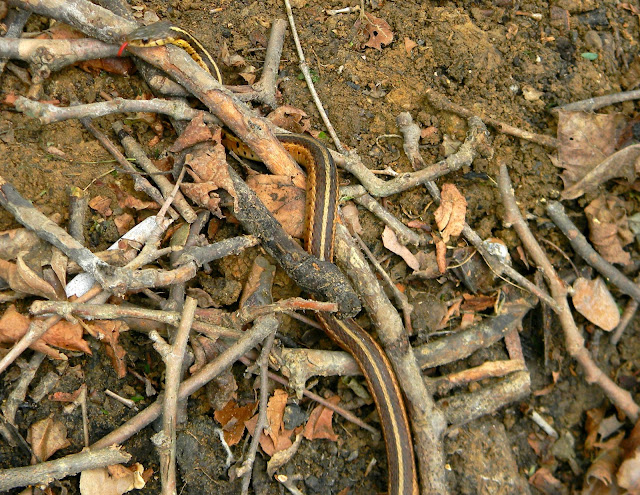 The second snake was wider and around 2 feet long - stripes were a bit wider and coloring more muted. 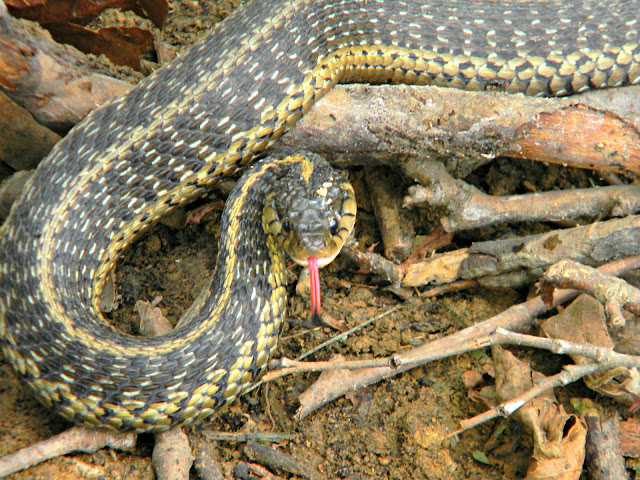 We chased them off so they didn't get burned and now they are currently living under the branch pile on the side of my yard. 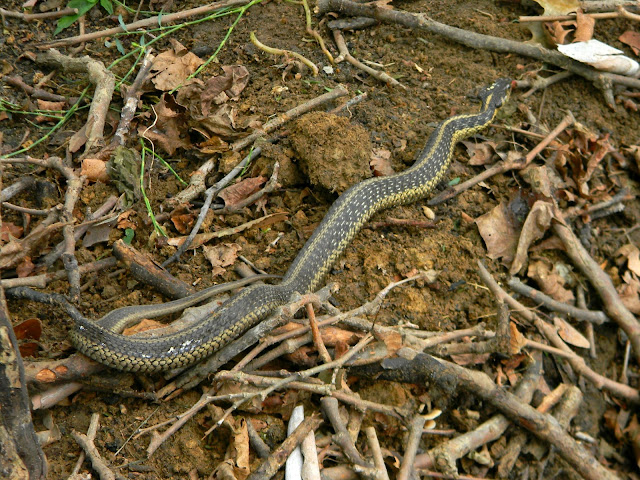 While trying to get to some of my tomatoes we came across this Yellow and Black Agiope (Orb Weaver)  that was in the way. It was about 2", so needless to say I went without my tomatoes that day. 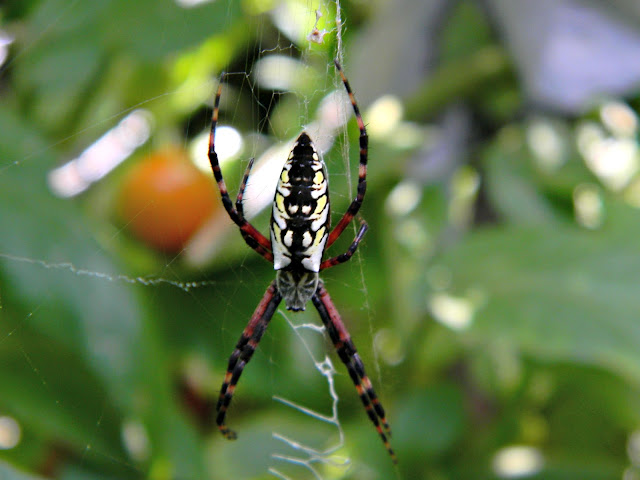 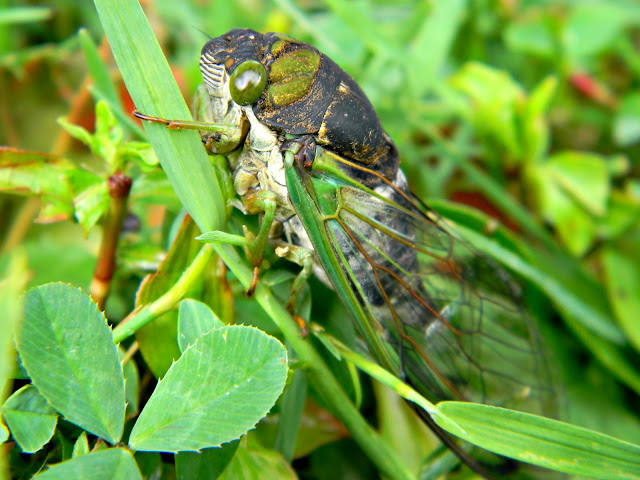 I absolutely love Cicadas. Occasionally they can get a bit annoying when they're pumping Al Green and all worked up for their sexy time (they can get LOUD), but for the most part you just hear some light rythmic whirring or thumping coming from the trees. This is the first one I've seen in Kentucky (you can hear them everywhere - but they remain out of sight). I'm not too sure why he was in the grass, except maybe he was just coming out of the ground where they pupate. At any rate, I picked him up and set him on our largest tree. As soon as he hit the bark he started climbing until he was out of sight. Their big green eyes and the light dusting of gold on their back always strike me as so pretty.

Another fun bug I learned about by having it fly directly into my face is the Tiger Bee Fly. First off, I love that name. It's awesome. If I were that fly, I'd be rockin' that name. 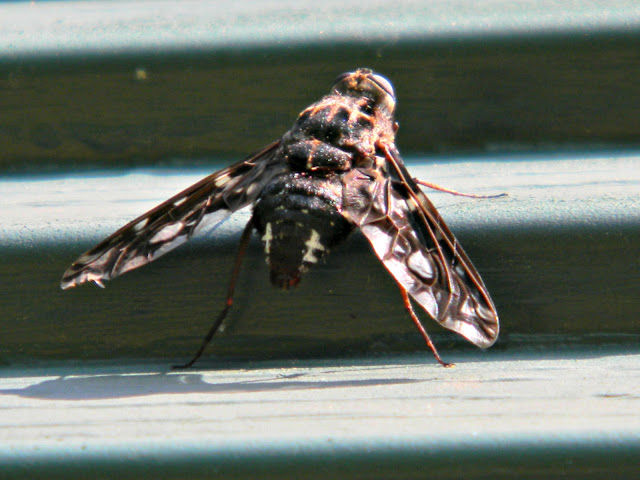 Second....look how big that damn thing is!!! 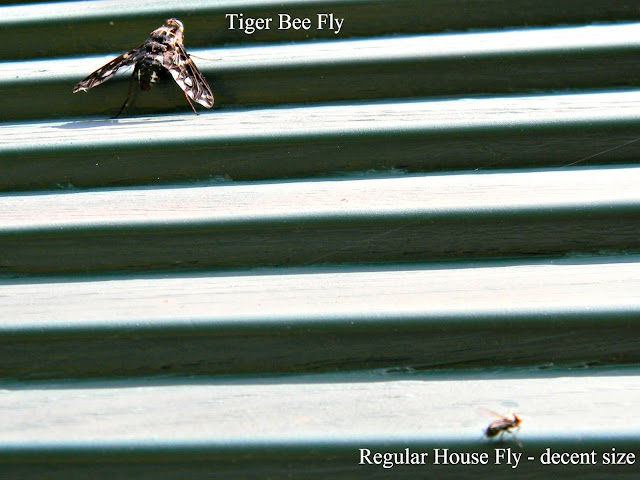 These next guys, I could dedicate a whole post to, and probably should have. These are Robber Flies. Two different types of them - and for the life of me I can't find their specific name. If anyone can help out please leave a comment.


I'd never heard of a Robber Fly before a  month ago. We were out at the farm for 4th of July and I kept noticing these large bugs that looked like a cross between a dragon fly and a wasp swoop out of the sky and attack honey bees in mid flight. They would grab the prey with their strong legs, often time tumbling to the ground with them, and then use their legs to hold them still while piercing a part of the body with their beak and injecting a paralyzing agent. When I came home from that weekend I started noticing them all around our house. I keep seeing varying accounts of how big they get - the ones around my house seem to be between 2-3" long - but I haven't caught one yet to measure it.

This one I found hanging on the front of our house, just outside the front door. It is similar to the type we saw at the farm in Indiana. It was munching on a Yellow Jacket, and as I watched it turned the Yellow Jacket several times to inject different areas of the body. 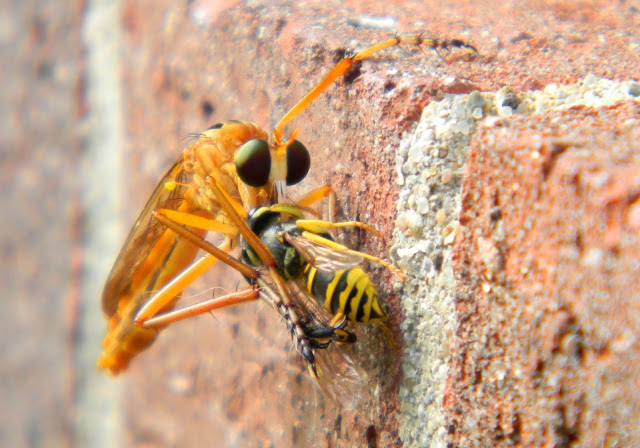 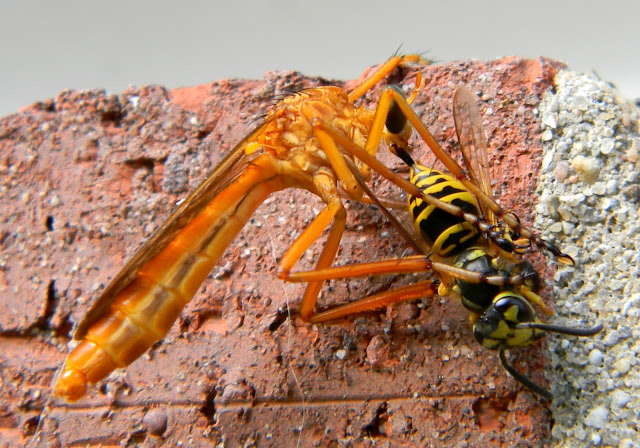 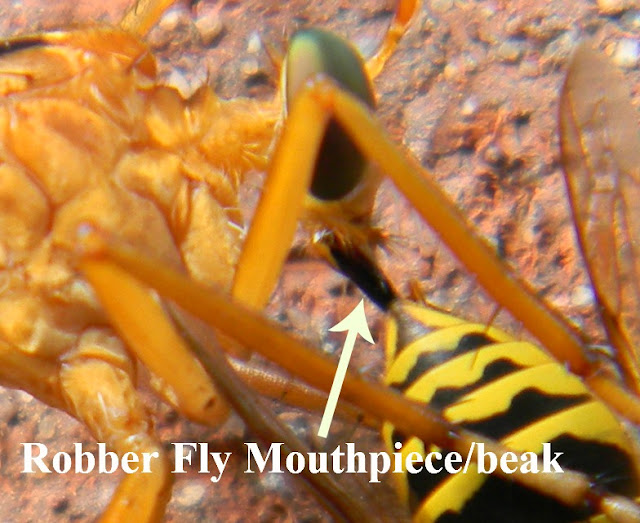 Now that looks like it would hurt if it bit you. They aren't supposed to be aggresive towards humans, but I hear they will bite if handled and it hurts! One site I found has a first hand account of a very large Robber Fly taking out a small hummingbird. The person was able to rush out and save the hummingbird, but that is just a testament to what strong and voracious predators these guys are. 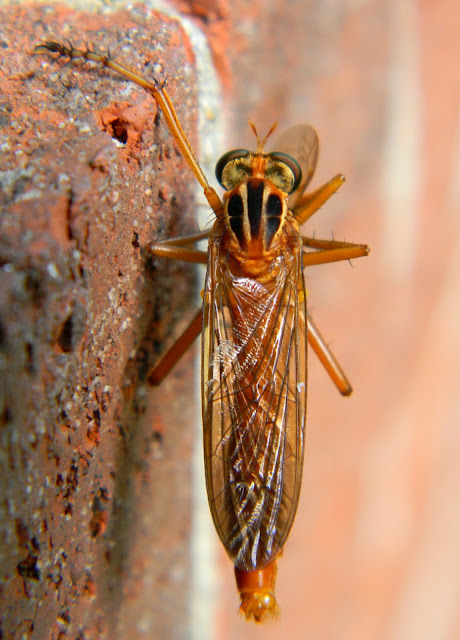 Now, this darker one is the kind of Robber Fly I'm used to seeing around the house. This isn't a great picture - if you want to see one in more detail I suggest this picture. We have lots of these guys. As a matter of fact I accidentally let one in my kitchen the other day and it was like having a really fast, pissed off, loud, dragon fly buzzing around. I hung out on my back porch for a bit that day....traumatized. 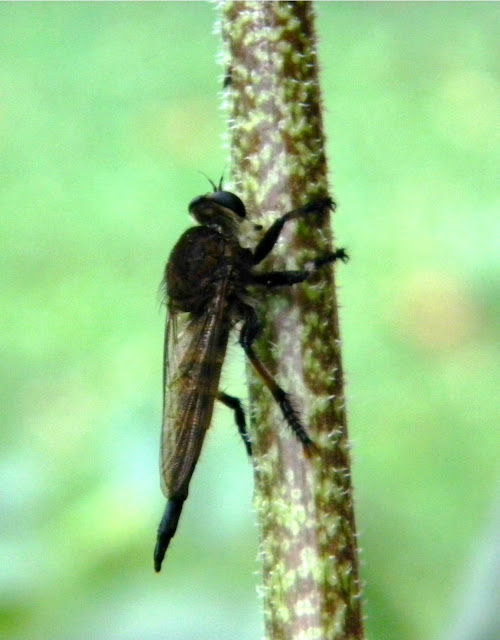 There is a rather large wasps nest in the facsia of our house that we haven't taken care of yet and I'm pretty sure that's why I'm seeing so many of them. A large portion of their prey is wasps and I've seen them take out quite a few. So while I scream and run at the sight of them, I won't complain too much. Btw - that isn't a stinger on the black Robber Fly. This is a female and that is her modified ovipositor, or what she uses to lay her eggs.

Then there is Mr. Dung Beetle...why do we have a Dung Beetle? Well, I'm not really sure. There are some cows up the road, so maybe he just wandered off. 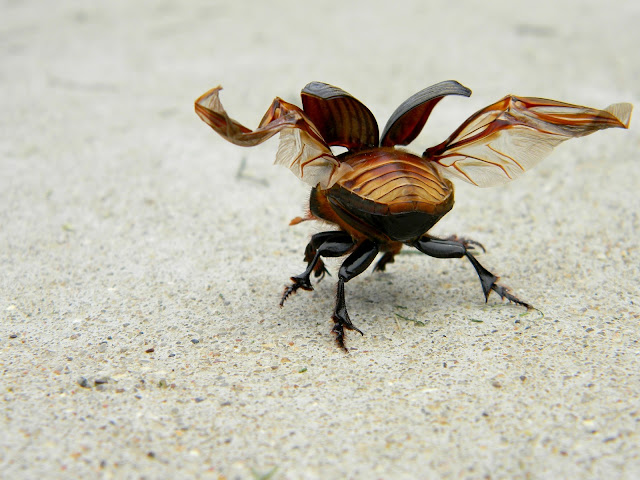 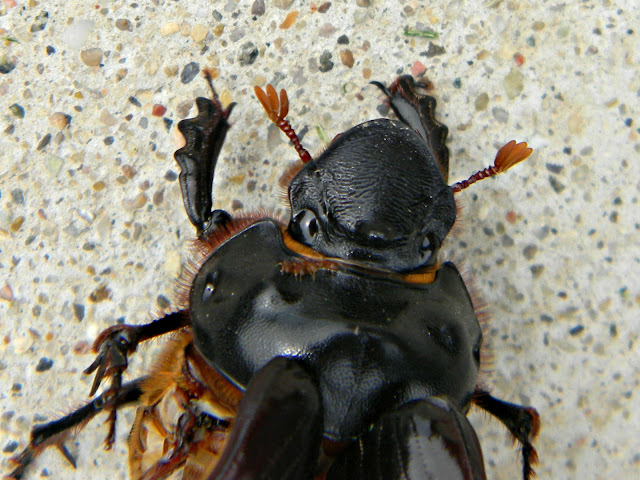 I'll leave you on a cute note, the sunflowers that I planted right outside my kitchen door are in full effect (and killing me with all the pollen - note to self: don't plant close to house next year). They've finally started attracting some Goldfinches. Yay! I've been wanting some, and these are the first I've seen in Kentucky. When we lived in Yorba Linda, we had a flock of about 20 that would come every single day and feed. I've missed them. 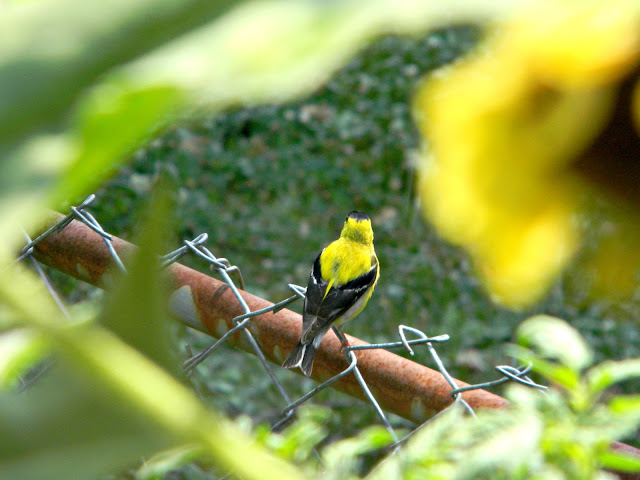 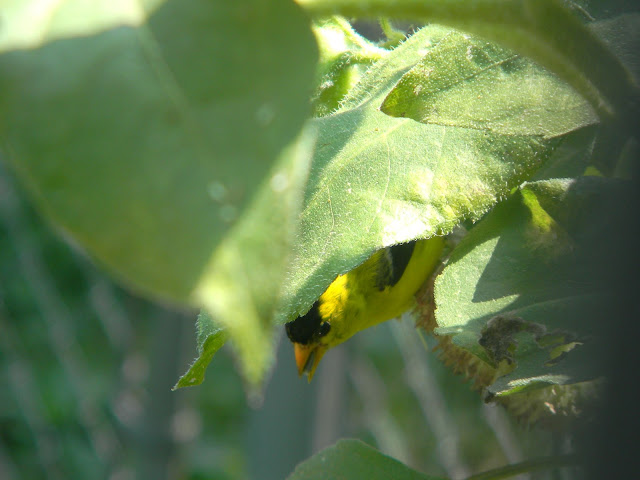 Wow. Are you still there? That was a lot of photos. And you can imagine all the creepy crawlies I see when I don't have my camera handy! The weather is still warming up though - just entering the dog days now. So I'm sure we'll be seeing even more in the next month. Have any of you guys come across any weird or wonderful bugs around your homes?