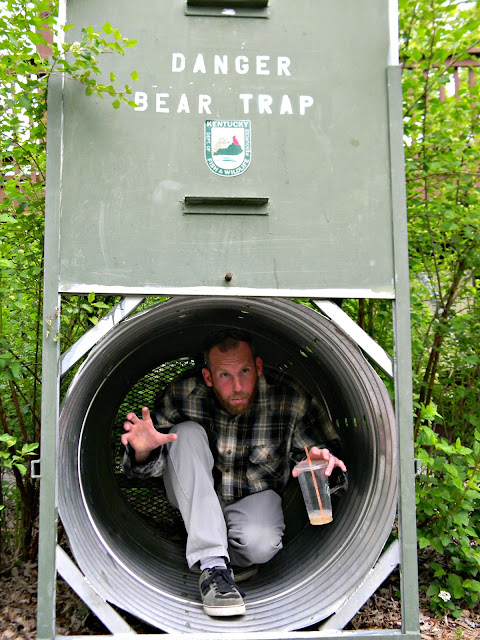 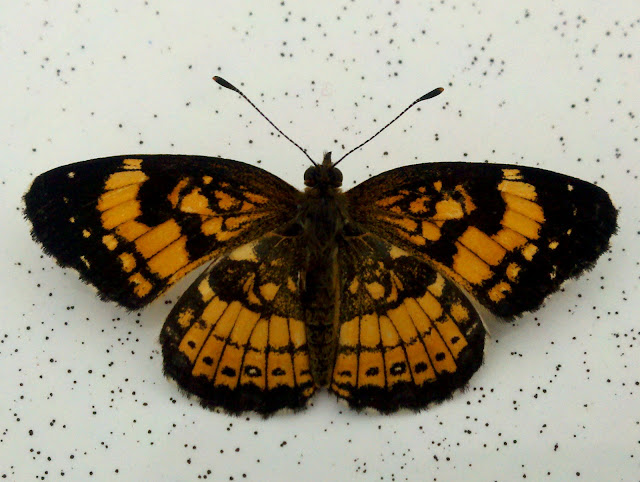 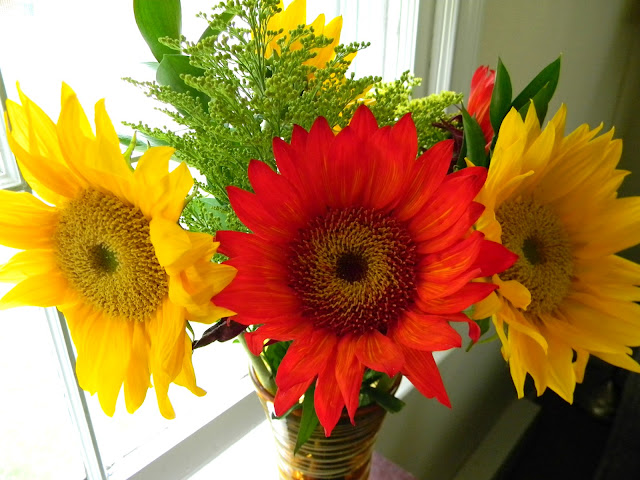 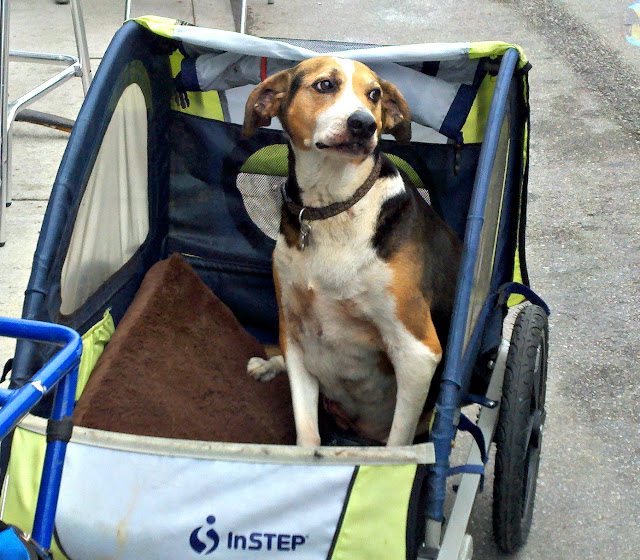 We have some spoiled puppies here in Frankfort 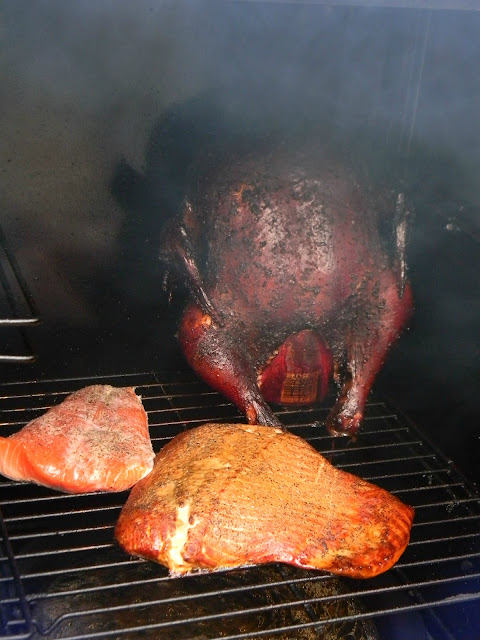 Beer can chicken and salmon in the smoker for dinner - yummy 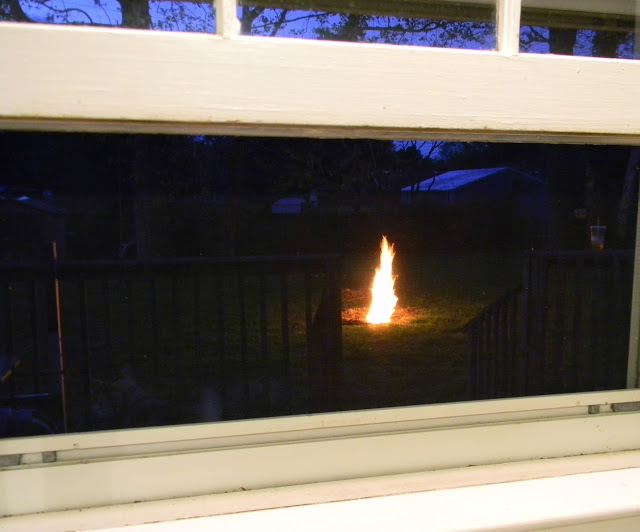 Fire pit from my kitchen window 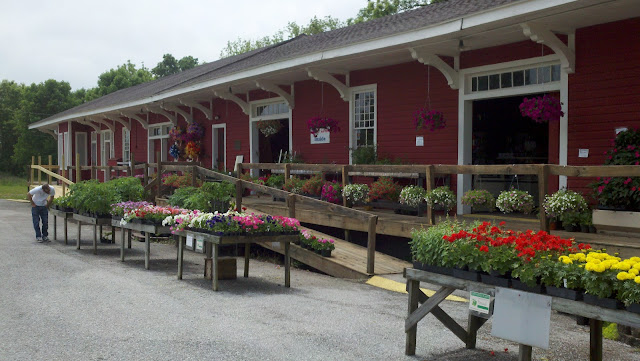 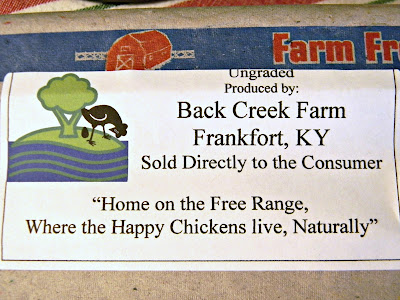 The most delicious eggs I've ever had - we picked these up at the Franklin County Farmers Market. 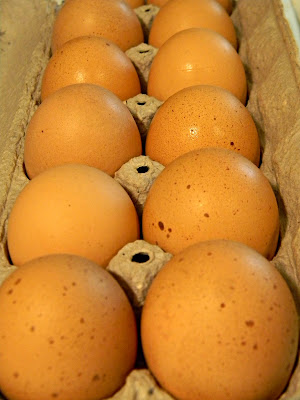 Look at the speckles! They were so pretty and tasted so unbelievably fresh 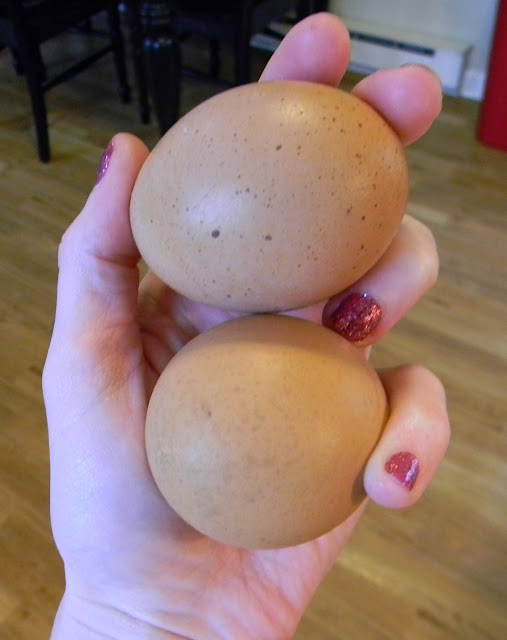 And evidently happy chickens make gigantic ass eggs
This farm has duck eggs and goose eggs too - which are both huge, but I'll have to try eventually 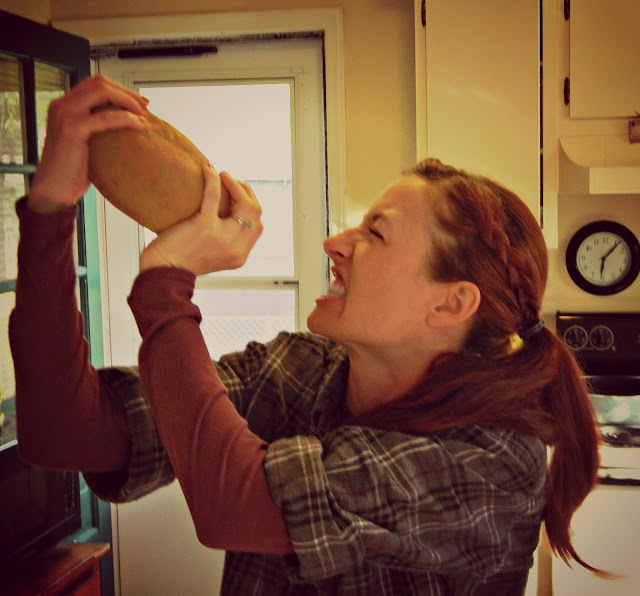 The yam I was so excited to buy - almost the size of my head and it was the smallest one!
I love this time of year and all the Farmers Markets!!!

Well, that's about it. It's been pretty quiet around here the past few days.. I'm totally good if it stays like that for a few more days :)

Anyone catch the Kentucky Derby yesterday? Did you see that amazing finish that I'll Have Another pulled off? I thought for sure Bodemeister had it, but nope. I guess you can never really tell until the final stretch. It's amazing to watch those horses race - stunningly beautiful creatures. What's even more amazing is watching the coverage of the Derby on television. It's like the Academy Awards out here with a lot of the focus on what people are wearing (and drinking...lots and lots of drinking). It might be fun to actually do the whole in-field thing at Churchill Downs. Don a big floppy hat with too many flowers on it and sit around drinking Mint Juleps... Sounds pretty good to me!

We went into town for the Frankfort Derby Fest in the morning. It was an overcast and humid day which actually made it really pleasant to walk around. There was a pretty good turn out. Everything was ponies, ponies, ponies! From the picnic benches, to the Mustang Club and the stick races for kids, to the pony rides. There were horses everywhere. It's very clear where these people's feeling for horses lie - close to their hearts.

Here's a crap load of pictures from our day. Not nearly as many as I'd have if I had my camera. I actually had it with me, but when I went to snap my first picture the dreaded 'Out of Memory' icon came up and I nearly had a heart attack. Turns out I'd left all my SD cards at home and was running on empty. So Todd whipped out his handy dandy cell phone and I snapped away with that. I should say that he's dropped his phone about a billion times and the screen only half works, so the quality of the pics is iffy at best...


We started our day behind our Capitol Building at the gorgeous Flower Clock. I wanted to see what plants they'd picked for this season. 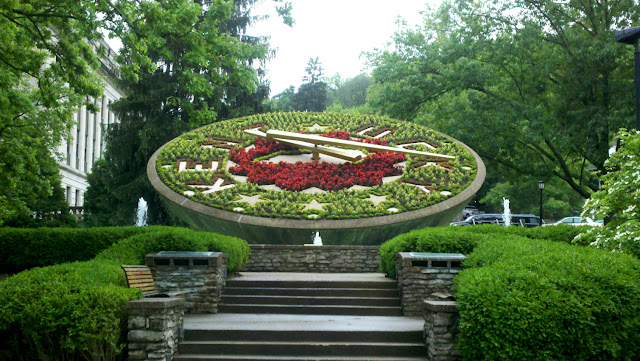 Then we headed over a couple of blocks to the main celebration which took place on the lawn of The Old Capitol Building and in the surrounding areas. This is one of the little streets in our downtown area. I can't say it enough. I am in love with this area. 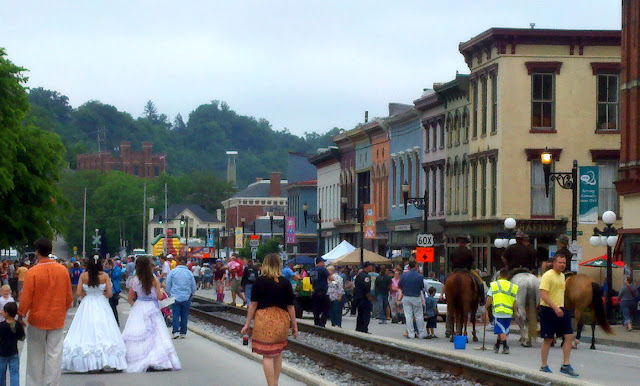 There were a lot of hats (they even had a little Derby Hat making station in the Kentucky Historical Society for children) but not as many as I thought there would be. I'm not gonna pull punches when I say that the guys were much more fun to see in their hats then the women this year. Case in point 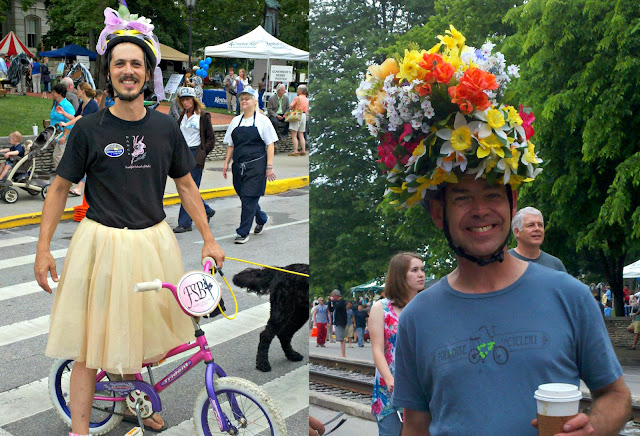 Then there was this grouchy little old man that was sitting on a bench amidst a gaggle of other old men (adooooorable). He was the only one with a hat on and he looked so grumpy I had to stop and ask if I could snap a shot. 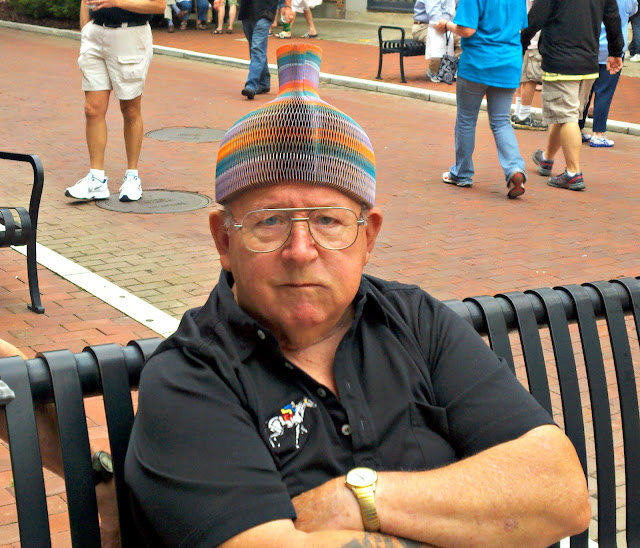 After the first shot he wanted to show me that his hat was reversible.
Evidently that was the 'happy' side of his hat because we got a smile out of him then. 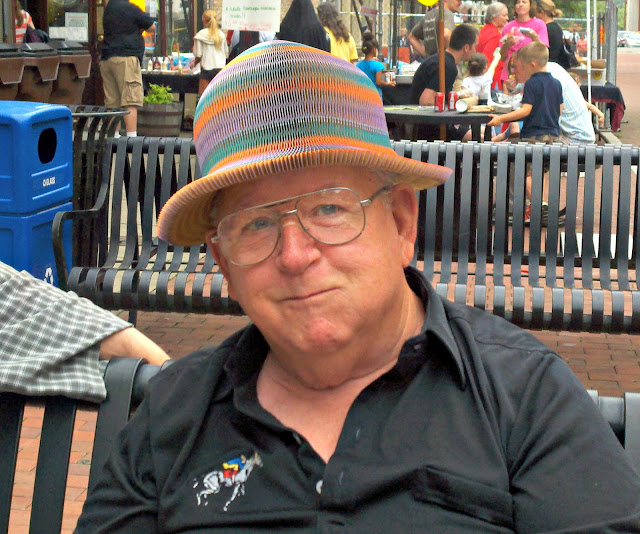 We sat for awhile on the lawn and ate some BBQ and listened to a couple of the bands that were playing. All the picnic benches that were scattered all over the lawn were styled as horses. So clever! 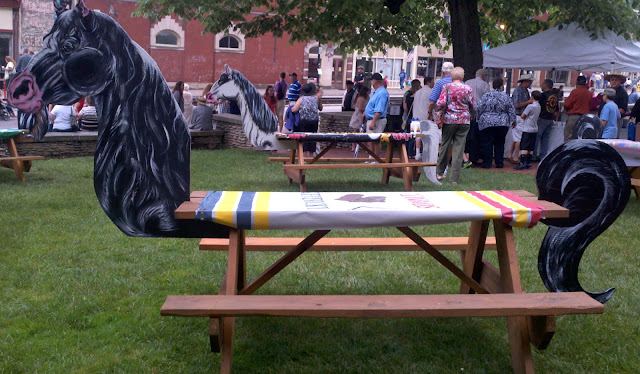 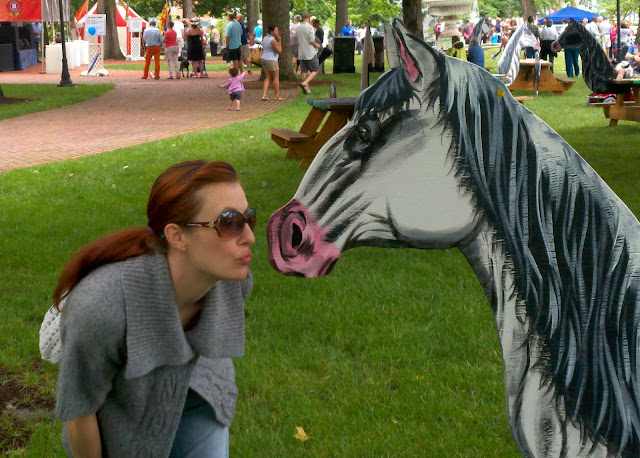 Loved them so much that I wanted to jump on top of one and take a picture, but each table had these adorable hand painted canvas table cloths that were painted by local Bluegrass schools. The one below was created by Calvert City Elementary School. 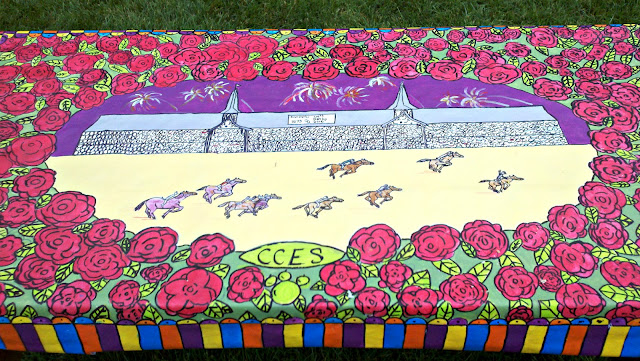 There were tons of exhibits set up, a Thoroughbred, food and craft vendors. While we were eating we watched one of the  animal exhibits from Salato Wildlife Center. This owl was absolutely beautiful. I mention the center a lot. I'm looking to hopefully eventually work with them. 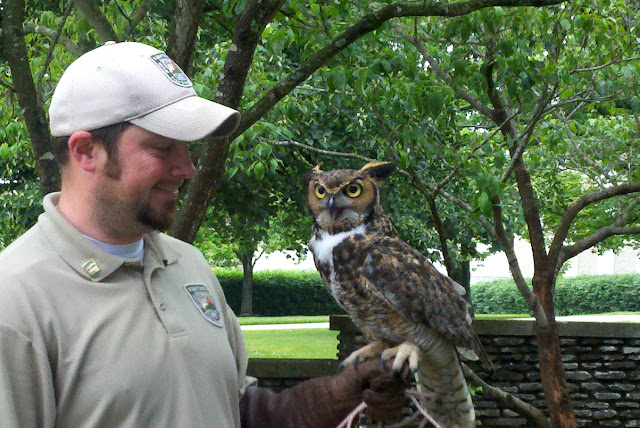 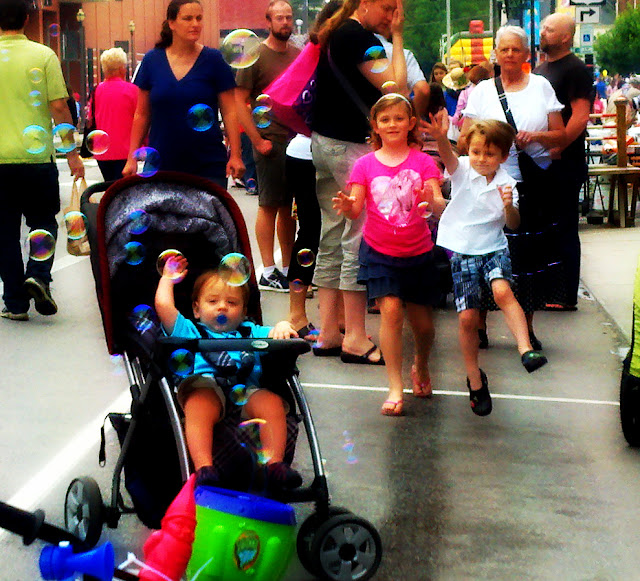 All in all we had a wonderful day. We capped it off by going home and smoking an Apple Blue Cheese Pork Loin with Cranberry Glaze....umm ohmygoodness...watching the Derby, and  playing video games (I'm getting a bit embarrassed to admit how much we game at our age - generational thing?) 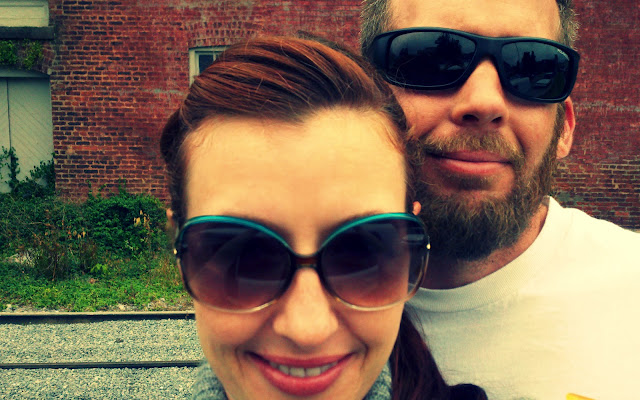 On an end note (feel free to totally tune out at this point, it may not interest you) we stopped by the Kentucky Historical Society while walking around. They were having lots of Derby related activities. We'd never been in there before so we walked through it looking at the exhibits. I came across one that kind of took me aback when I saw it.

Pretty self explanatory but just in case- it was a very small exhibit on what Kentuckians call Judge Lynch, another term for the lynchings that took place in the state. There were several plaques with literature. One that I snapped included the numbers of lynchings that occurred between the years of  1860-1900. These numbers included black sympathizers. 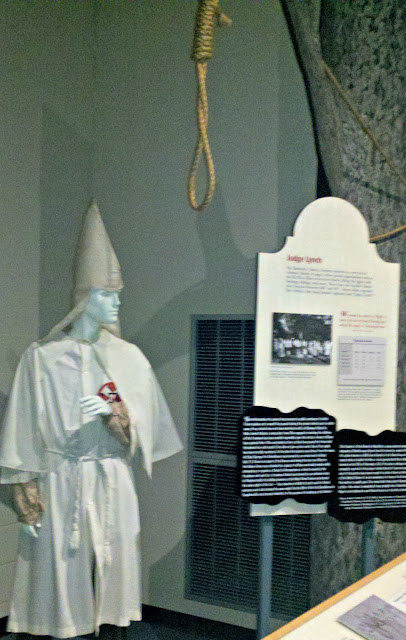 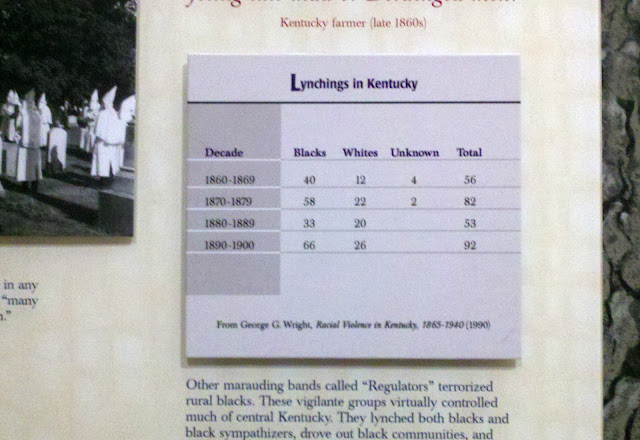 At first I was just surprised to see it. A damn noose hanging there and a dude in a Klan hood amidst our Derby Day fun. Then I started to read the literature they had around and I thought 'Well, they're not trying to sweep it under the rug - they're owning up to the states part of racism in history'. After I got home I realized that the exhibit was the smallest exhibit in the very large museum...and it was placed in the back furthest corner of the place...in kind of a dark area. Not only that but were there no lynchings in the state after 1900? I find that highly unlikely and wonder why that wasn't addressed in any of the literature. So, I'm not too sure what to make of that. At any rate it was a huge reminder that we live in the South now. And good or bad we are in an area that is simply steeped in history. It's fascinating.

On a little bit of a brighter note, I stopped in our Governors Hall which is hung with all the pictures of our former State Governors. It's a huge, beautiful hall with hand painted portraits like so 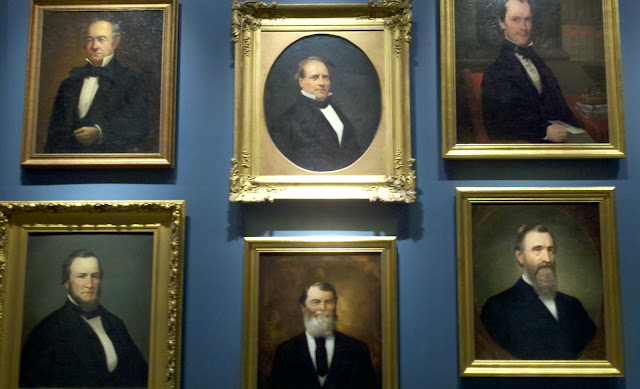 In one section they have a large sign asking "If you were the Governor of Kentucky what would you change" and they have post it notes, encouraging children to write their ideas and stick them on the wall. I loved this and they had some of the most adorable ideas. My favorite was this one 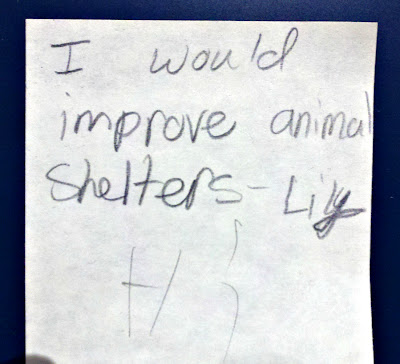 Aaaaaaand of course my husband immediately honed in on this one and thought it was the greatest thing ever. I'm not too sure this one came from a kid... 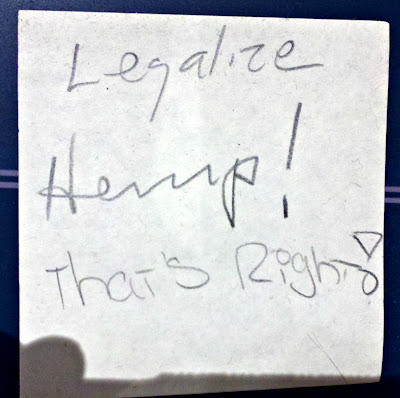 Phew!!!! That was a huge amount of photos! And were of that great of quality - whateves.

I'm hoping that everyone had a great Cinco de Mayo! Another thing - we had no clue whatsoever that it was Cinco de Mayo - like, none! It was never even mentioned anywhere out here! Everything was just total and complete Derby madness! But I hope those of you that did remember had the opportunity to enjoy it to the max!

We're headed off to the Derby Celebration today (we love our horses here in Kentucky) but I wanted to stop off and introduce you to my Featured Blogger for the month of May - Jenna from the adorable blog SewSavoirFaire. Jenna is the sweetest person and I was lucky to meet her through Shannon of ShannonBear. She has the best personality, awesome style (this gal's shoes will make you drool...not that I could ever walk in any of them - props to you Jenna!), and her furry feline friends play a large part in her blog...which I love. She's was just recently engaged and it's been fun following her adventures in wedding planning - I'm looking forward to seeing what other plans she comes up with to top her big day off!

So if you would please, my friends... 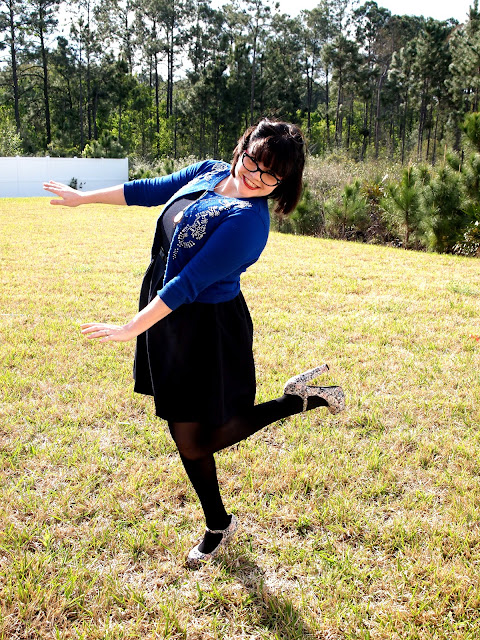 Hey everyone! My name is Jenna and I blog over at SewSavoirFaire (www.sewsavoirfairecreations.blogspot.com) which I would consider a somewhat crazy and usually off beat blog about the life of a cat loving lady. And of course outfit posts where the clothing may or may not be covered in cat hair. Come by and say hello!

Hopefully we'll be hearing more from Jenna this month, so check back! ♥

We don't feed our dogs human food. They feed it to themselves.


As is normal for us, after grocery shopping we cleaned out our cupboards and fridge. I had some of the food I was going to throw away sitting on the floor of the kitchen. I left to change the laundry really quick, and heard my husband yelling for me to grab my camera, which of course I did and went running back in there. You never know what you're going to find in this house so I like to keep it handy. What I didn't expect to find was Crystal with her head stuck in a bag of chips. Not only that but she was going to town on them. And didn't really respond to us telling her to get her head out of it.

I'm going to issue my normal request to please ignore my nasally, incredibly loud and whiny voice on the video. As a matter of fact go ahead and just turn your volume down...there isn't anything that important that needs to be heard on it. Seriously, I hate to think that is what I sound like in real life.

Anyway, for your viewing pleasure - another one of my mutts' great adventures.


It's kinda a good life these guys live :)

Tomorrow is Derby Day here in the Bluegrass - we'll be attending the downtown festivities for our little town of Frankfort. Unfortunately I don't have my Derby Hat...maybe in a couple of years (shhhh, I still think they're kinda silly - I'm sure they'll grow on me as tradition though), but maybe I'll have some fun pictures of other ladies in their Derby gear.