Um, yeah. Sorry about that.

Hi. I'm the girl that left you with the disembodied deer legs in my last post. I warned you - but I still feel kind of bad :) It truly wasn't to gross anyone out, I promise. That is just what I saw, it was stuck in my head, so on our next trip to the grocery store I popped the camera out the window and took a quick pic. Yep. On our way to the grocery store.

I don't have anything against hunting. I did when we first moved out here from California. I just didn't understand it...and I guess, admittedly, I am still struggling to understand it. But I'm doing my best to come to terms with it since we've moved here. See in California deer are like magical animals. You hardly ever see them in the concrete laden jungle of So Cal. As a matter of fact, I'm struggling to recall one time I ever DID see a deer...even camping I don't think I did (Todd has many times). They always seemed pretty and graceful to me...and like I said, rather elusive.

Flash forward to last year when we moved to Kentucky. I'm not kidding you when I say that I pretty much cried anytime I drove almost anywhere. This wasn't due to hunting - this was due to the roadkill. Dead animals everywhere! I couldn't drive anywhere without seeing at least one dead deer on the side of the road. Raccoons, skunks, squirrels, opossum and groundhogs were pretty common to see dead also. In the first weeks I was here, I was on my way to Starbucks on the other side of town...this stupidly adorable chipmunk was panicking in the middle of a four lane road - running back and forth under cars trying to get across. I slammed my brakes on and he successfully managed to clear my car...only to run right under the tires of the car next to me. He got smooshed. I saw the whole thing and got pretty hysterical. Of course I was dealing with having just moved across the country - away from all my friends and family to a place very different from home, so I'm sure that contributed to the emotions. Well, the people at Starbucks felt so bad for me (when I say I was hysterical, I mean I could barely breathe I was crying so hard) that they gave me my entire order free...and a couple of coupons for free drinks. I just have a very, very soft spot in my heart and soul for animals (and evidentally Starbucks has a soft spot in their corporate heart for me).

So, maybe you can kind of see how hunting affected me. We have some avid hunters in our family out here also. And one of my best friend's, Mel, swears by deer meat. I've never had anything more than a tiny bite of deer meat (I was kind of tricked into eating that)...I've managed to successfully avoid having to eat it, even though the majority of our family out here does. I think the family understands that I'm a bleeding heart hippie, and while they make jokes they no longer pressure me. I still express my thoughts about it though (in a diplomatic way). In my opinion, if I have to listen to how you hunt deer, then you can listen to me about how I don't hunt deer. And oh boy - everyone talks about hunting out here. That's what they do. They hunt. For many reasons. One is to cull the deer population. Another is they just like the taste of deer meat. I'm sure some are just stone cold killers. Some people eat nothing but the meat from their deer kill most of the year. So while I don't necessarily agree with it, like I said before, I'm coming to terms with it. And after being here for just over a year I can drive by the dead deer (saw three on the way to the park yesterday) without crying. I do notice them though- I always notice them. I wish I didn't. For some reason, I'm like a damn dead deer detector.

There are deer everywhere out here. Every-freaking-where. Herds of them on the side of the road. So I understand we're not going to run out of them anytime soon. Anytime I/we see them, it's a stop the damn car and let me take a picture moment... So here are a few of the pics (most blurry because I'm in the car). 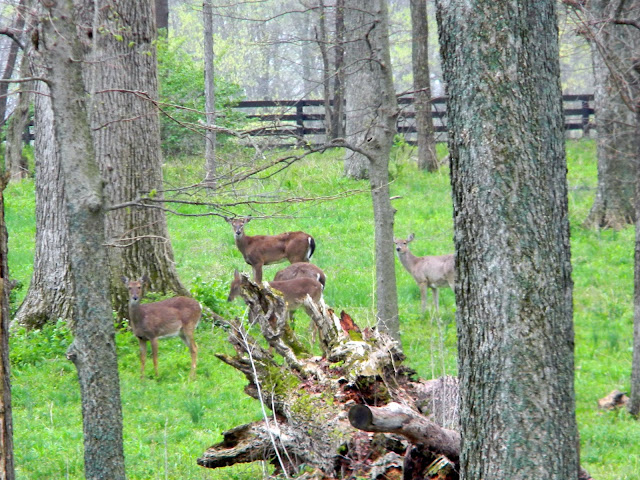 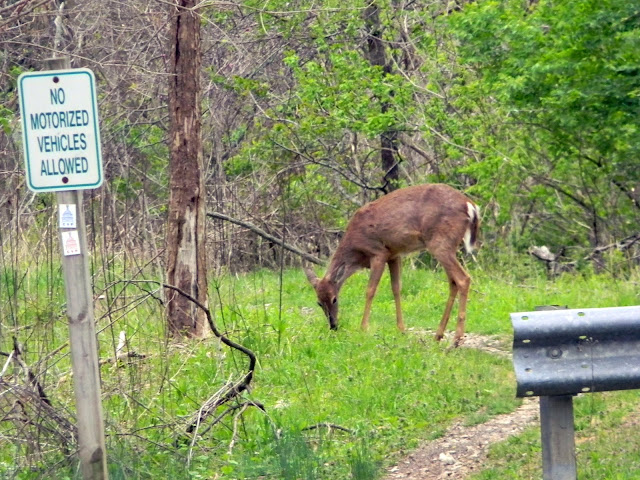 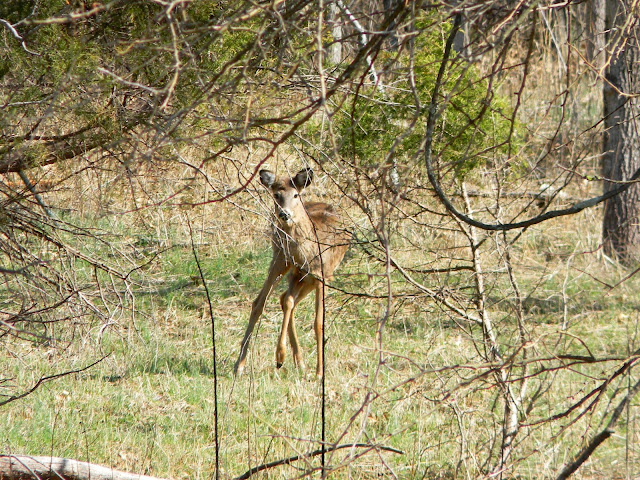 I hope no one took offense to this post or my last one. And I do want to make it very clear that I am not a vegetarian. I eat prepackaged, store bought hamburger, chicken and pork... This seems like a total hypocritical post now that I've said that, I'm sure. But for some reason it seems okay to me to do that. That is how I was raised, and it's already dead. Do you see my conflict here? My views aren't perfect and don't always make sense...but I'm working on them. And I don't look down on anyone who hunts. Let me say that again - I do not look down on anyone that hunts. I'm just working to come to terms with it in my own screwed up head. Truth be told though, I prefer hunting to roadkill. At least with hunting the animal is being used for a purpose, whereas roadkill is just the waste of a beautiful animal - left to rot on the road. Not that anyone chooses to wreck their car or body by running into a damn deer.

Wow - if you made it through this rambling, disjointed post, I commend you. As always, please feel free to express your opinion here - I take no offense to anyone disagreeing with me. Just please be respectful while expressing it :)