I think the last time I mentioned our living situation was when we were just starting to look for a new place to live. Unhappy with the place we're currently renting, we set out to find a place we'd be more comfortable in. My intention is to not move again until we're able to buy a house, so we need a place we're both happy with. Before we move out I'll try to give you a little photo tour of the place we're living now - you'll be able to see the crooked staircase with the cracked stairs and our kitchen that is conveniently located in the basement (with no dishwasher or garbage disposal). It's a cute little house in the historic district of Frankfort - I believe this particular house was built in 1935 - but it's just ollllllllld. And really hasn't had many improvements on it through the years.


There are still many of the inconveniences that I bitched about before such as no dishwasher, no garbage disposal, only one bathroom and no garage - but honestly we were having a really tough time finding any place that had one of the things I just mentioned, let alone all of them. The set up of houses is just different out here, something I have to accept. Once we buy a place, we'll be able to do whatever we want with it, so we'll eventually have those items. I'm actually used to functioning without a dishwasher. I don't think I've had one for the past several years. Living without a garbage disposal isn't a difficult as you think, and it's made us a little more aware of food that can be used for composting purposes, or that can be used to feed the local wildlife.


The new place is on about a 1/3 of an acre and it's still in Frankfort, but it's on the other side of the town in a way more rural area. The backyard is fenced with HUUUUGE established trees, storage shed, much larger bedrooms, but most importantly it's all one story. I can't tell you how much I'm looking forward to that reducing our heating and cooling costs. This old place was horrible during the winter months. In California my heating bill never, ever got above $50 - and that's with us being pretty wasteful. My gas bill was over $200 last February. Kind of shocked the hell out of me. But I guess since it typically gets to be 55° colder out here...that makes sense. I might want to plan these posts out better, I'd probably seem like less of an idiot.


Typing whatever comes to mind probably doesn't help much either.


We stopped by to look at the place and Todd snapped a picture of me in front of one of the trees in the backyard. 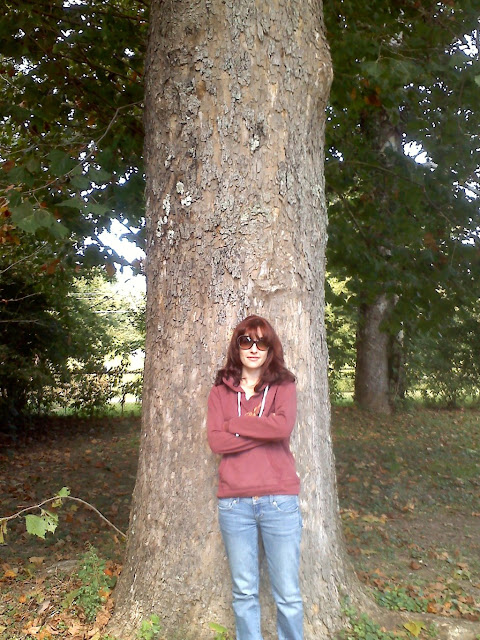 They're huge! Todd thinks they're about 60' tall, which may not sound like much, but it impressed the hell out of me! I can't remember how many were there, I'm thinking there are about 8 or 9 like these. I may be remembering it wrong though.

Here are some picture of the bark and leaves. Don't mean to seem stupid but can anyone help me figure out what kind they are? 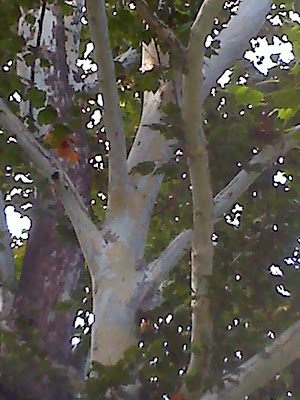 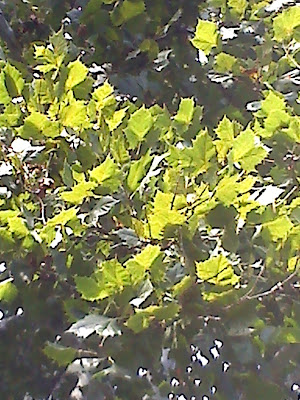 We get the keys next Thursday, I think. But the place is ours as of the 1st of October. I can't even tell you how excited I am about this! Not really excited to do the cleaning and moving...and painting part, but ecstatic about the rest.